Shaik Aboobacker Bin Ahmad enjoys a multifaceted personality of a scholar,orator, writer,organizer,educationist and fore-fighter of social revivalism.He recognized and proved by his action

Biography
Kanthapuram A. P. Aboobacker Musliyar is the leader of one of the traditionalist Sunni factions of Muslims in Kerala state, India called A. P. Sunnis and is one of the most famous Muslim personalities in Kerala. He was also named among 500 most influential Muslims in the world. Kanthapuram A. P. Aboobacker Musalyar is known for his professionalism and expediency. Shaikh Aboobackar Ahmad is the General Secretary of the All India Muslim Scholars Association and founder and Vice Chancellor of Jamia Markazu Ssaquafathi Ssunniyya (Sunni Cultural Centre), Karanthur, Kozhikode, Kerala. He is also chief patron of the Sunni Youth Society and General Secretary, Jamiat Ulema (Kerala) . He was appointed as a member of the NAC for the implementation of the RTÉ act in 2010 Kanthapuram hails from a mediocre peasant family of 'Alangam Poyil', the much popular and better known “A.P.” stands for this.He is well known as Shiekh Aboobackar Ahmed in Arab and Western World.

Born in Kanthapuram, a village in Calicut District of Kerala, on 22nd March 1939, Kanthapuram hails from a mediocre peasant family of 'Alangam Poyil', the much popular and better known A.P. stands for this. His father, Mouthariyil Ahmed Haji, was very pious and so was his mother, Kunheema Hajjumma, who was the daughter of Kuttoosa Molla, a teacher of Qur-An in the locality of Mangad, where reaches the family routes of his father too. He has two brothers and three sisters. His father died when he was twelve. Zainab is the wife and he has six children, namely, A.P. Abdul Hakeem Azhari, Maymoona, Hafsa, Sakeena, Rayhana, and Najma Firdousi. C. Muhammed Faizee, Abdul Bari Musliyar, Muhmmed Koya Saqafi and Obeidullah Saqafi are his in-laws.

He completed his elementary studies from A.M.L.P. School of Kanathapuram, where both Islamic and public instruction system co existed. Later he completed his higher Elementary education.
Kanthapuram completed his course in Qur'An studies from Vennakkode Abdulla Musliyar, who was a scholar and qari'a, (one who recites Qur An phonetically). He persuaded his studies in the Darses (the form of schools exist in mosques for religious and spiritual education) of Kanthapuram, Vavad, Kolikkal, Chaliyam and Thalakkadathur. He was awarded the degree of Moulavi Fadhil Baqavi from the renowned Islamic study centre of Baqiyath Swalihath, Vellore, in 1963. Sheikh Hassan Hazrath, Muhammed Abubakkar Hazrath, O.K. Zainudheen Kutty Musliyar, Puthoor Abdulla Musliyar, Kizhakoth Abdul Hameed Musliyar, Vavad Pocker Kutty Musliyar, Kuttikkattor Bichali Musliyar are some of his famous teachers in different institutions and disciplines.

Starting his career as a Mudarris, (Principal of Dars) at the Juma Masjid of Mangad (Elettil), in 1964, he served the same in Kolikkal Juma Masjid between 1970-76 and in Kanthapuram Juma Masjid during 1976 to 1981. In 1978, he among other prominent leaders, founded the Markazu-Ssaquafathi-Ssunniyyah or the Sunni Cultural Centre, at Karanthur, near Calicut. Since 1981 he is the chief instructor at the Markaz Shariath College.

He brought about a good social status and dignity for the religious scholars with his active interference in the society. He became a member of the Central Mushawara of Samastha Kerala Jam-iyyathul Ulema in 1974, followed by the office secretary, before becoming the joint secretary of the Samastha. He was a member of the committee, which was appointed to expand the organization in all India level in 1976. He held the designation of the general secretary of Samastha Kerala Sunni Yuvajana Sangham, (S.Y.S.) from 1975 to 1996, and he was the president of the organization during the tenure of 1996- 2004. Presently, Kanthapuram is the Chairman of the Supreme Council of S.Y.S. He also served as the member of Hajj committee of Kerala and Chairman to the Editorial board of the Arabic Text Books of Govt. Schools of Kerala. 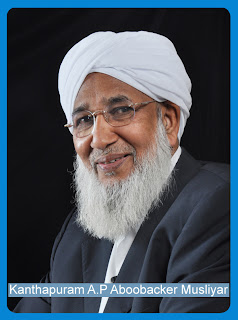 He was elected as the General Secretary of Samastha Kerala Jam-iyyathul Ulema in 1989. In 1993, when the All India Jam-iyyathul Ulema was set up, Kanthapuram became the General Secretary and in the same year he was endorsed as the Consortium Qasi of Calicut and in 2003 as of the Wayanad district as well. Besides these, Kanthapuram is the treasurer of Samastha Kerala Sunni Education Board and General Secretary of the famous Markazu-ssaquafathi-ssuniyya or The Sunni Markaz.
The debates and dialogues of Kanthapuram is very famous especially against those sects of the Muslims who emerged against the puritan nature of Islam and the teachings of Qur-An. The debates of Kuttichira, Ayiroor, Kuttoor, Pattambi, Pulikkal, Valiyaparambu, Kottappuram etc with Kanthapuram in lead, was surely a blow to these sectarians.

In the post independent India, where illiteracy and poverty were the ruling factors as the balance sheet of the colonial rule, Kanthapuram began his revivalism, keeping in mind the social and educational uplifting of the downtrodden class including that of the Muslims. He visualized and translated into action farsighted projects in order to change the social anarchy and educational backwardness of the Muslims, which were prevailing in the Muslim society after the 1921 Malabar Mutiny. Kanthapuram is the visionary, founder and founder General Secretary of Markazu-ssaquafathi-ssuniyya, which is a world famous educational consortium, including that of Orphanages, Vocational Training Centers, School of Islamic Shariah, School of Qur-An Learning, Engineering College, English Medium Educational Institutes, International Public Schools, Women's Educational Centers, Hospitals and Commercial Complexes. Apart from this, Kanthapuram serves as the chief patron and Chairman of about 300 Educational Institutions, which are spread all over India. The Islamic Educational Board, headed by Kanathapuram runs more than ten thousand Madrassas, which provides religious education up to the secondary level.

Focusing his attention on the suppressed and sidelined population, Shaykh Aboobacker Bin Ahmad felt that the need of the hour is to provide proper education to lift them up from all type of inhibition thus giving them all round social development. He pragmatically proved the concept of education by the very resolute principle of Modern education in any branch, backed by moral traditions and religious values.

Those different orphanages run by him adopt the poor and orphan students of either sex and provide them with free food, accommodation and education. They are supported until they complete higher education and attain a self-stand. The Thurkiyya Orphanage, in the Markaz campus Karanthur, alone shelters more than 10000 students. Markaz do have projects to protect and look after those men who are affected by natural calamities and riots. Those deprived and orphaned due to the earthquake in Andaman & Nicobar Islands and the suburban provinces of India and Pakistan, are educationally fed in Markaz. Markaz shelters and provides with education to more than 600 Kashmiri students, who are either orphaned or denied of education because of the endless and year long fights. Kanthapuram is famous in India and more in Arab countries by the title "Abul Aytam", meaning 'the Father of Orphans', for the services he rendered to the orphans and destitute.
Kanthapuram stands against those powers who are politically exploiting the Muslims. A genre, which is well aware of the civil rights keeping in mind the social responsibility and national integrity, has been moulded by the organization under the leadership of Kanthapuram. He constantly makes staunch campaigns to expose the menaces of terrorism and antinational activities. His campaign under the banner, 'Kerala Yathra, to Bond the Human Hearts', was widely appreciated.
[edit]Position

Favorite Books
As a writer in Arabic, Urdu and Malayalam in the leading journals, Kanthapuram has authored some scholarly studies. He is well conversant in Arabic, English, Urdu, Tamil and Malayalam.